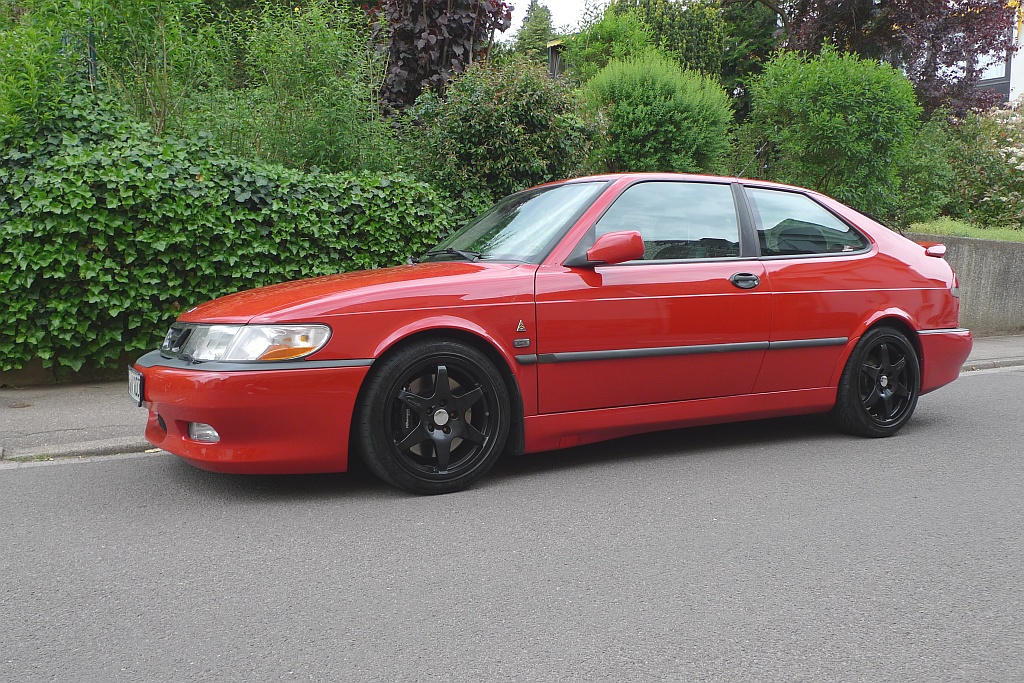 This beautiful laser-red car was delivered new from the factory to the previous owner by Wigwam Saab, North Providence, Rhode Island, USA, on February 28th 2001, complete with a three year warranty. Its service history is flawless until 129.999 miles.

I bought the car November 22nd 2006 with 136.442 miles and immediately had a service performed by the Saab specialists of Viking Automotive, Gaithersburg, Maryland. Both O2 sensors were exchanged for brand new Bosch models.

I drove the car in the US for two months before shipping it to Germany via Elizabeth, New Jersey, on January 26th 2007 (138.884 miles). My friend Kai picked it up for me at Bremerhaven, Germany and performed the minor modifications necessary to pass German road safety and emissions inspections.

On April 30th 2007, I registered the car in Germany and picked it up at Kai´s place in Hamburg four days later.

Being a MY01, it has 230 hp and 350 Nm of torque in stock condition, but of course I couldn't resist modifying it. Look here for a dyno history of this car.


Those are the only purely esthetic modifications to the car. All other modifications serve the purpose of improving the car´s street and track performance.

In August 2007, a new front brake has been installed:


In October 2008, a new rear brake has been installed:


In March 2010, the front Porsche brake was replaced with a Hirsch Performance brake system:


In May 2011, I've gone back to the stock rear brake. Only the custom made steel braided brake lines stayed.


In June 2007, at 140.800 miles, I took the car to Heuschmid for a complete engine and gearbox overhaul, to have a healthy base for future tuning.

Look here if you want to know more about the engine and gearbox overhaul.

At the same time, the first performance tuning was performed on the car:


In June 2008, at 152.000 miles, a rebuilt T7 engine block by MapTun Performance, Sweden has been fitted. The cylinders have been drilled to 90,5 mm with a very smooth surface, and the block has been equipped with Wössner forged pistons.

At the same time, the original cylinder head has been gas flowed by Johann Heuschmid himself (intake and exhaust ports polished, valves polished, seats ground, valves ground in), and 8 new exhaust valves have been installed.

Look here if you want to know more about the performance engine.

In November 2009, an Aluminium Race Intercooler by KL Racing, Sweden has been fitted.

Also in June 2012, a new bypass valve, an aluminium EVAP valve kit and silicone vacuum hoses, everything supplied by Saab-Tuners, Netherlands have been fitted.

Gijs from Saab-Tuners also adjusted his Stage III+ Software to my car. I did 8 laps on the Nürbugring with this setup and it runs very nice - smooth and powerful.

In April 2013, a Hirsch Performance 2.75" stainless steel cat back system was installed by Heuschmid.

Look here if you want to know more about the exhaust modification.

Here, you will find some pictures of this car.