After my trip to Zandvoort in April, my brake discs were quite worn, and as I was quite happy with the performance of the stock 308mm Viggen brakes, I ordered a new set of stock brake discs and Ferrodo DS 2500 pads (the pads were still ok, but I would have changed them anyway). There was a race driver training at Bitburg Airbase on 21/22nd may on which I planned to paticipate, and I wanted to exchange the brakes before that event. Things, however, went differently. Another Saab fan made me an offer I couldnīt refuse: Porsche 4-piston brakes custom fitted to my Viggen. The problem was: The earliest date we both could agree on for fitting the new brakes was 25th may.

I decided to take the chance and to participate with my old brakes on the car. This proved to be a mistake. The training was quite a bit harder than I imagined: They had arranged a track at Bitburg Airbase, which was about 2 kms long and had 4 corners: After a long straight, a very long 180° bend, then another long straight, a very narrow 180° bend (only about 20-30 meters), a 90° right turn and then another 90" left turn. There was no problem reaching 200 kph+ on the straights, but there was no chance taking the narrow bend with more than 70 kph in the Viggen (the also participating Porsche 996 GT3 managed 80 kph at that corner, but the 996 turbo was even slower than me). Before lunch, we had already managed about 90 laps on that track, which means 90 times braking from 210 kph to 70 kph at the narrow bend and 90 times braking from 200 kph to 120 kph at the long bend. However, discs and pads looked ok to last trough the afternoon...

After lunch, it was "race time", and the cars were grouped by training results, so I ended up directly behind the two Porsche 996, and right beside the Boxster S, in the second start row.

I did very well during the 15-lap warm-up, and even overtook the 996 turbo in the 2nd lap of the race - I was third then behind the GT3 and the Boxster S. But in the seventh lap, approaching the sharp bend, I tried to brake, and the pedal remained at the floor. Luckily, there was some space after the bend, and I managed to stop the car after a few (hundred?) meters by shifting down. I drove back on the track and tried to do a few more laps, hoping that the pressure would return. It didnīt and I had to abort the race.

The car was losing brake fluid at the caliper, and the brakefluid had burned inside the rim. It was not a pretty sight: 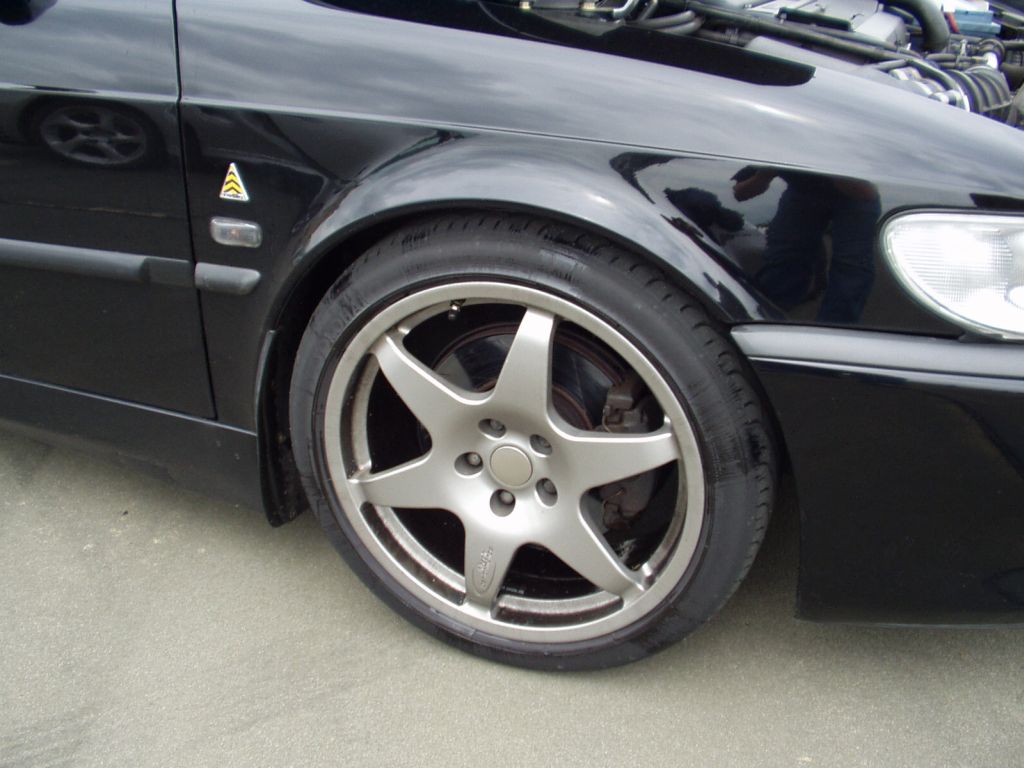 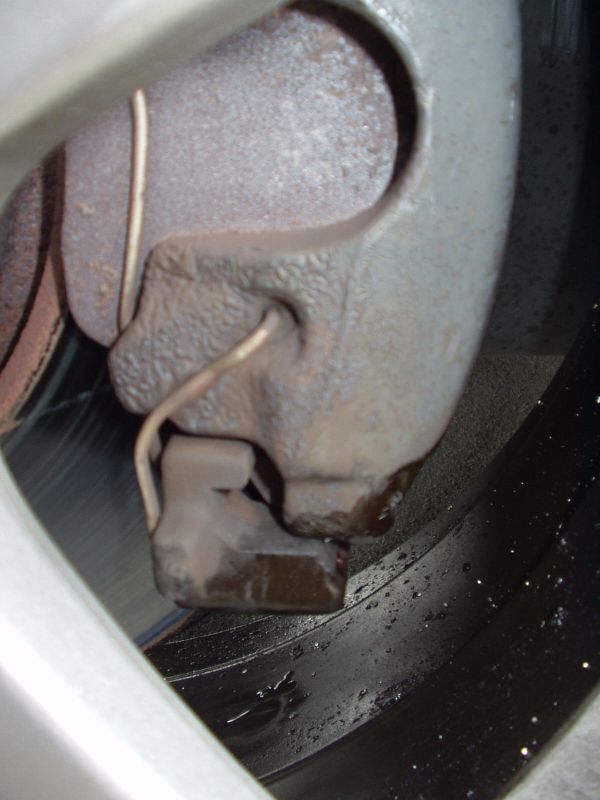 I had to leave the car at the track, but luckily, Frank, the guy who had sold me the Porsche brake, and who is tuning and repairing his Porsches and Saabs himself for years now, agreed to come down with his mobile home and exchange the brakes at the roadside (99.700 km): 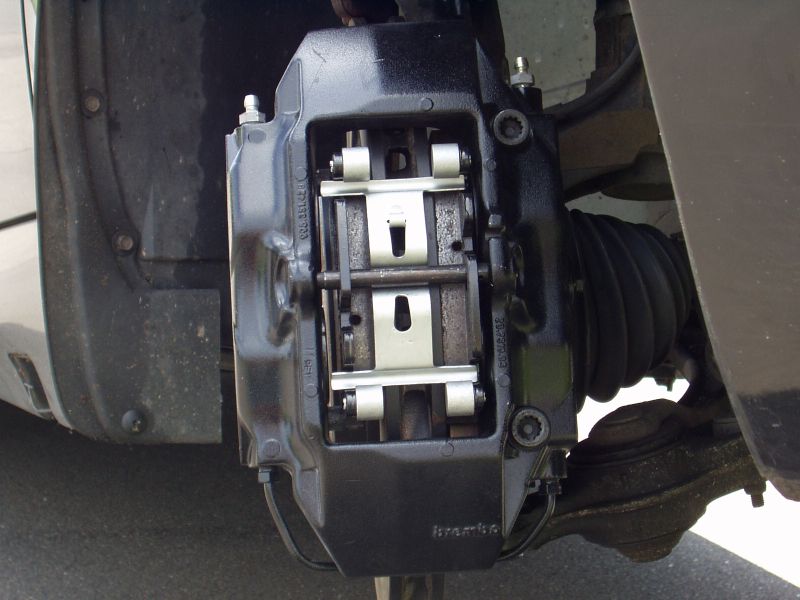 Thatīs how the result looks (it took me nearly two hours to clean the wheel - burnt brake fluid!). 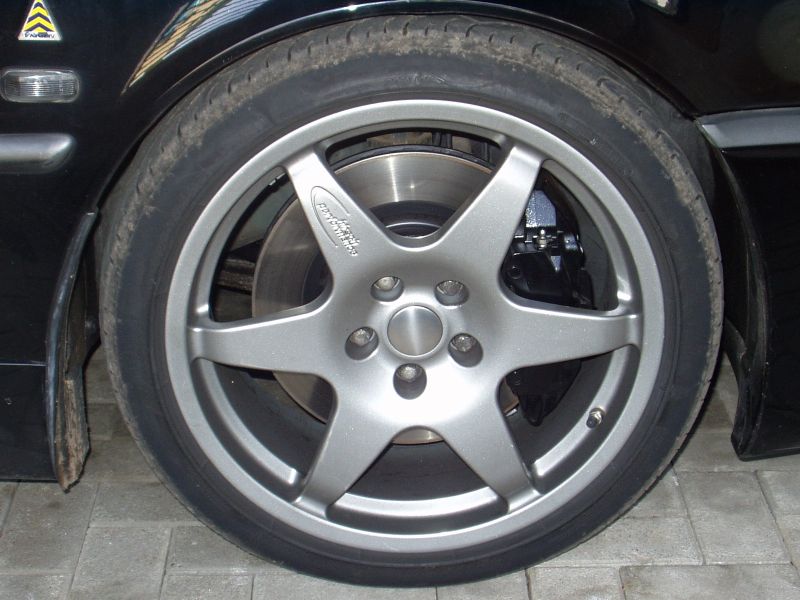 And thatīs how the stock calipers look. 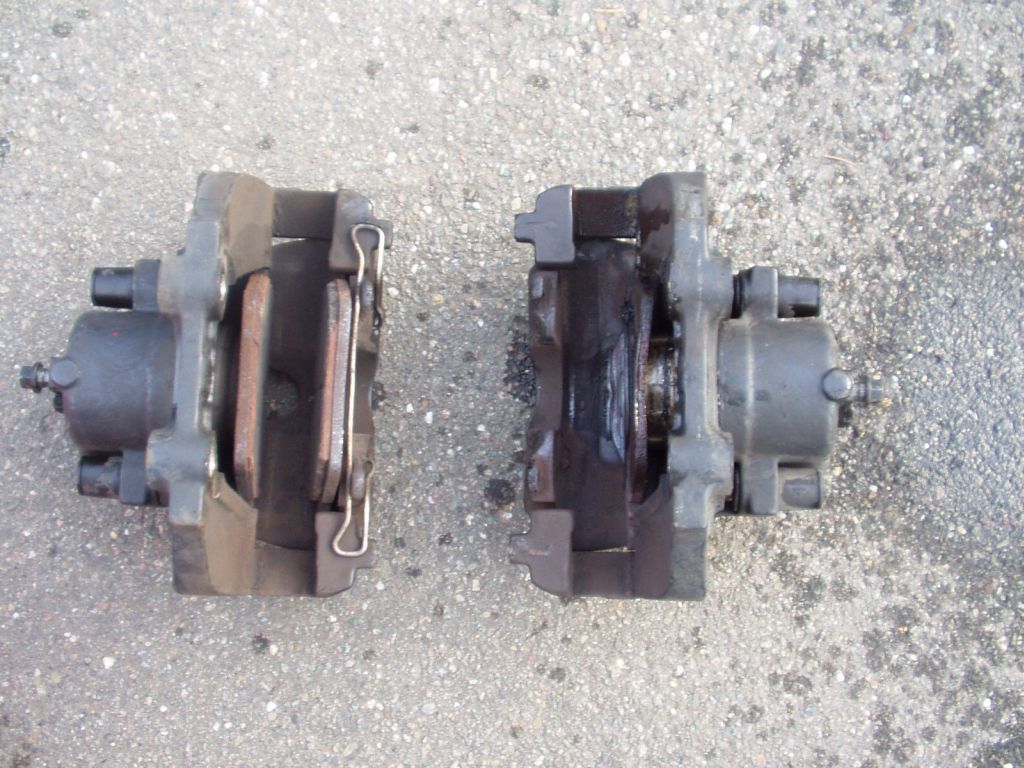 The moral of the story is: Change brake pads (especially Ferrodos) early, and also check the pads at the inner side of the wheel.

Thanks to Frank for coming down all the way from Hannover to Bitburg to help me (440 km one way)!
© 2005 - Philip Schneider Design - Chris Deutsch
</html